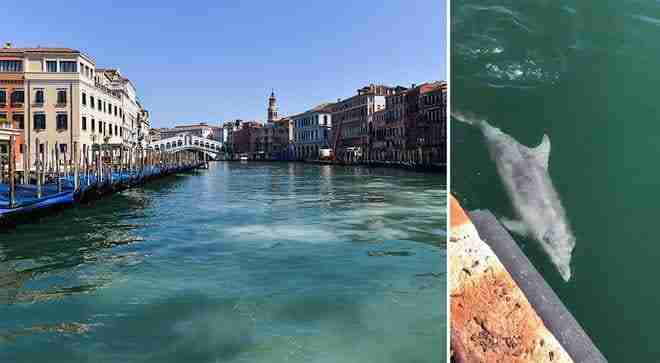 Like me, you’ve probably been thrilled to hear that dolphins and swans are swimming the Venetian canals. Hold your seahorses. There’s more to the story.

Given a break from human pollution, we’ve heard,  the water in Venice has purified and wildlife has returned! Hooray!

Well, turns out this is almost true. I checked it out on Snopes.com, and folks have jumped the gun a bit in their twitter posts: yes, you can see to the bottom of the canal now, but that’s not because the water is purer–it’s just boats haven’t been around to dredge up the now settled sediment. Yes, there are dolphins in the water, but the dolphins have always been there. It’s probably just easier to see them in the clearer water. And who knows? Maybe without humans around, they feel braver about poking up their heads?

Siiiiigh. It’s just that I really liked the idea of clean water in Venice. Apparently, a lot of people did. The story of the Venetian dolphins spread like wildfire worldwide, and I find this a heart-warming indication that folks don’t want to live in human filth. We want Mother Earth to be healthy and teaming with critters.

Not to fear. I gotcha covered. Here is a real story of someone making a real difference to really clean up the water.

Enter young inventor Boyan Slat. He’s a good-looking, brilliant, motivated innovator (I’m already jealous) who could be described as a lean, mean, marine cleaning machine. Slat observed plastic waste was killing oceanic life and entering the human food supply. He also observed that most of the plastic waste in the ocean is carried there by rivers.

Put it all together and now Slat is cleaning up the world’s 1,000 top-polluting rivers with a robot he invented called the Interceptor. The completely solar-powered, unmanned barge paddles upstream, slurping up plastic before it has a chance to ride the current into the ocean. An on-board sensor alerts the on-shore operator when the belly of the barge is full, and the plastic is then collected and disposed of safely. Wowzie zowie! (Does the Interceptor also pat its plastic storage unit and go *braaaaaaaaaap!* when it’s full? That would be the icing on the cake.)

No, this story isn’t a sexy, ironic benefit of social distancing, but it is one worth going viral, especially now when people are–understandably so–forgetting about plastic waste in the panic of trying to keep germ-free. Me, included. Where once I would not have taken a restaurant meal home if I didn’t have an earth-friendly container, now I’m buying take-out salad in single-use plastic boxes. Where once I would have brought my metal coffee mug to refill at Starbucks, now I’m pulling out of the drive-thru with the paper cup and plastic lid. On front porches all over my neighborhood, delivered groceries sit bagged in plastic bags.

Disposable plastic equates with being germ-free to us humans, and panicked as we are, we’re willing to risk Mother Earth’s health “just during the crisis.”

And yet, we don’t want to! Look how quickly a not-even-really-true tale of a healing waterway zipped around the world.

Even during a crisis, we can make the decision to keep germ-free AND keep our planet clean.

And, dare I say it, with all the extra cleaning we’re doing to stay germ-free, it’s worth taking a look at not just the plastic bottle, but what’s inside it. Read the label. What sort of warnings do you read? What toxic chemicals are killing germs, yes, but killing what else? This is why I love Pro-Tek so much. Pro-Tek is completely nontoxic and won’t pollute water. You can clean your kitchen and bathroom with it, and if you take the extra step of letting it dry for ten minutes, your surfaces will be germ-free without toxic chemicals. And with Pro-Tek’s Recycle and Reuse program, you never have to throw your bottle away. That is pretty close to being perfect.

Now, if only I could get the Interceptor to come clean my house. That would be perfect.

Pro-Tek is dedicated to no plastic waste. Check out America’s Most Robust Recycle and Reuse Program.