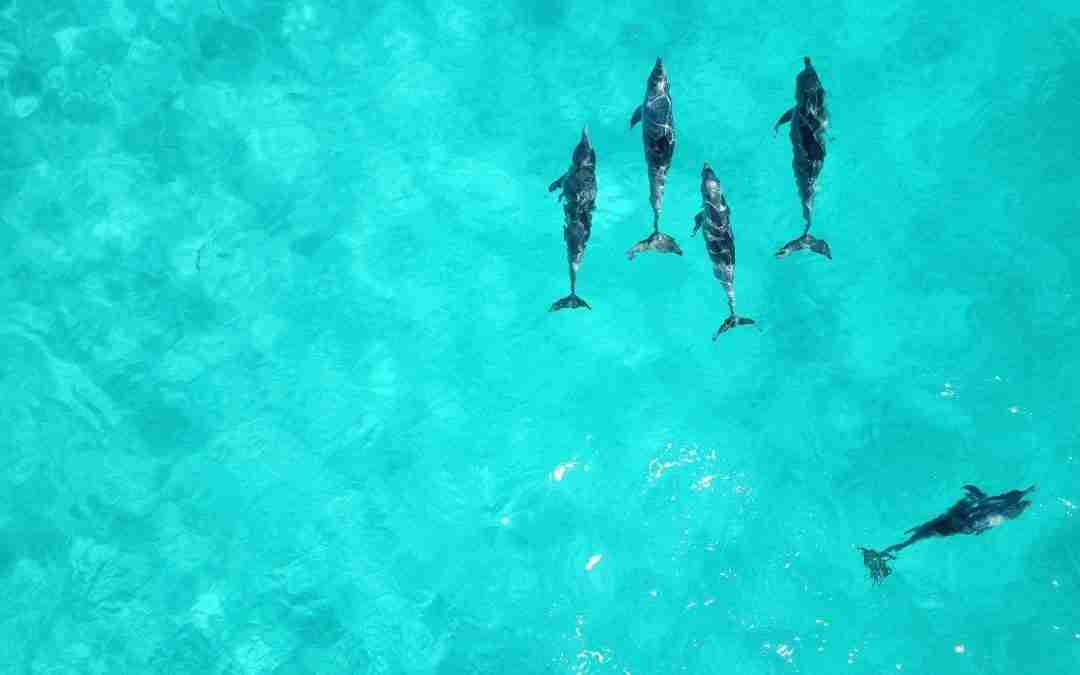 It’ll surprise you! Even though it’s right under your nose.

For the last two decades my kids and I have been watching an evolving herd of deer making rounds through our neighborhood. There always seem to be eight, the bulk of them young does, a couple bucks with big horns, and a handful of  itty bitties keeping up. They seem to disappear for months, and then, boom! There they are on the side of the road, grazing in the tall grass, poking up their heads for just a moment and then bounding off in powerful leaps. Whenever we see them, we figure it’s good luck for the whole day.

Wild animals are nothing short of fascinating in their beauty and abilities. I’ve compiled a list of five amazing animals, and wouldn’t you know they have one surprising thing in common. See if you can guess it.

That beguiling smile! That’s the first thing I think of when I see dolphins. Did you know dolphins are one of the few animals, who like humans, have culture? They use tools, speak a dolphin language, have names for each other, make up silly games, and work collectively to raise their babies. They can leap 20 feet in the air. What really gets me about dolphins is they recognize when other animals are injured or in trouble, and they try to help. Even humans! The Guardian recently reported a pod of dolphins protecting human swimmers from a great white shark for over half an hour until the shark lost interest. Wow.

These cute little guys may be the smallest of North American bears, but they’re not tiny. Black bears can grow up to 400 pounds or the size of two sumo wrestlers. Unlike dolphins who rely on living in a village, black bears are loners. Everyone already knows they hunker down for the winter, but did you know they hibernate for up to six months? The entire time they don’t eat, drink, pee or poop, and they only take a breath every 45 seconds. Compare that to one of the longest known fasters in human history, Barry Horne, who only lasted two months without food. No wonder bears wake up kinda grouchy.

Sea turtles tend to have a thing about the number 100. They live for 100 years. They’ve been around for over 100 million years. They lay 100 eggs every time they nest. When nest temperatures are warmer rather than cooler, gestating eggs tend to hatch as female rather than male. Hot mamas! They adore jellyfish sandwiches, and they are extreme breath-holders. While Guiness has clocked Spanish-born Aleix Segura holding her breath underwater for 24 minutes 3 seconds, sea turtles can go without breathing for five hours.

Whether you say rah-COON or RAH-coon, few people actually like ’em. Me included. Insolents break into the garage and steal the cat food. But, for pests they’re pretty amazing: their hind feet can rotate 180 degrees like a Cirque de Soleil contortionist. The little masked boogers can also run 14 miles per hour, so they can munch kibble and scat faster than I can keep up with the freaking cat food bill.

Sea lions. I don’t know why they’re called lions when they have much more in common with Fido than Leo. Did you know sea lions use all four flippers to walk on land, like a dog? They have ear flaps, like a dog. And even though they have perfectly good teeth, just like your dog, they swallow snacks in one taste-bud-ignoring gulp. Perhaps there’s a reason they prefer to spare their incisors too much wear and tear–every year their teeth gain a layer just like trees get rings. That’s how you can tell how old they are.

So did you guess it yet? What all these incredible creatures have in common? The answer is they are threatened by something you probably use everyday.

All of these incredible creatures are struggling to thrive amidst record levels of plastic. It’s not that we’re out to get animals when we throw out grocery sacks and laundry bottles! But what many people don’t know is plastic doesn’t biodegrade: it breaks into smaller and smaller forever pieces that coat animal food like poison bread crumbs. Sunlight causes plastic to leach toxins into the water where sea lions hunt and dolphins give birth. Plastic film looks an awful lot like jellyfish, and when sea turtles eat it, it clogs their digestive tracts, killing them. Bears and even those stinky raccoons, attracted by the irresistible aroma, can get their snouts and paws stuck in a plastic peanut butter jar and starve to death.

How did we get into this mess? Well, plastic is cheap and lightweight and pretty much perfect for packaging. When we throw it out, we lose the sense that plastic really is forever. We buy more, and it sends a message to retailers to provide more. and let’s face it: not many of us are swimming with dolphins every day.

But the good news is you have the power to make big changes when it comes to protecting animals from plastic.

All it takes is a simple change in the way you buy stuff. Look for glass, aluminum and cardboard packaging. Ask your server to keep the plastic straw. Ditch the foam box and ask for a sheet of aluminum foil to take home leftover saag paneer. Buy chicken breasts wrapped in brown paper at the meat counter and let the store know you’re not a fan of the plastic foam tray. Buy recycled plastic products. Patronize companies that make a conscious effort to go plastic-free.

It’s really pretty easy. If everyone would make these little changes, it would create big reasons for dolphins to smile.

Did you know Pro-Tek™ has the most robust Recycle and Reuse program in the country? Send us back your empty Pro-Tek™ gallon bottle and we’ll refill it. We’ll even ship it back to you FREE. You save money AND protect the environment from dangerous plastic waste.