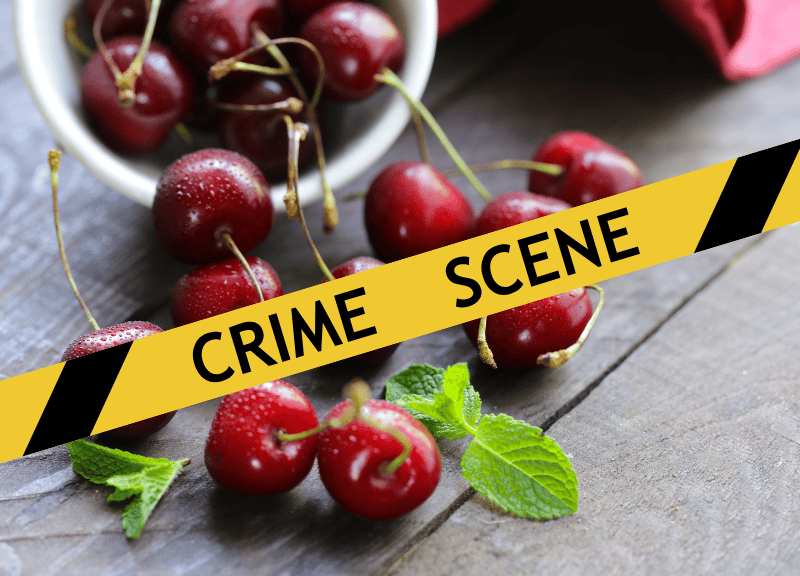 And Why You Can Eat Cherries Guilt-Free

“It looks like a crime scene in here!” I remarked to my neighbor as I walked into her covered patio. Her hands, the table, even her chair were splattered in blood red stains, as if an axe murderer had hacked someone to pieces. Despite the gory scene, the patio was filled with a heady, mouth watering aroma that made my stomach yearn. Heidi had just harvested her backyard trees, and was using a hand pitter to prepare for pies and canning.

“I know!” she laughed. “Do you think I’ll be arrested?” She scooted a bowl of freshly pitted cherries toward me, motioning for me to take a bite.

Lasting about four months for sweet cherries and two weeks for tart, cherry season is the shortest of all the fruit seasons, and maybe thankfully so. While the sweet red rubies are healthful and irresistibly delicious, they do make one hell of an unsettling mess. A portend? On a hunch, I did a little digging and discovered three scandalous crimes lurking behind one of America’s favorite fruits.

Before we get to actual crimes, let’s take a look at the somewhat stained genesis of the National Cherry Festival. While sampling cherry varieties and enjoying the gorgeous blossoms and crowning a cherry blossom queen and baking the world’s biggest cherry pie sounds like good fun, the festival originally began in 1925 as little more than propaganda tactic. The idea was to lure summer money spenders to Michigan. It worked! Tourists have been flocking to Traverse City, Michigan for almost a century and show no sign of losing interest. The festival has grown to include cherry wine tasting, a Cherry Royale parade, and even an airshow. Maybe I should plan a trip.

So while a business interest isn’t a crime, these next three anecdotes are. Japan has one of the strictest laws on the books about politicians giving gifts to their supporters–so strict, some politicians resigned over giving melons and potatoes to their local constituents. Imagine the scandal then when Prime Minister Shinzo Abe contributed almost $300,000 for his supporters to enjoy a cherry blossom tour and lied about it. Abe later came clean and resigned, but what does this cautionary tale say about the irresistible, intoxicating appeal of cherry blossoms?

I was kidding about Heidi’s axe murder-y ways, but one axe murderer is still at large for the dismemberment of a woman known as “Cherries Doe.”  Her torso washed ashore on a New York beach, stuffed in a suitcase, the only clue to identity being a faded tattoo of–you guessed it–cherries.

Scandal. Murder. And now suicide. Family members and friends were shocked when maraschino cherry manufacturer Arthur Mondella locked himself in a bathroom and shot himself as federal agents arrived at his plant for pollution infractions. Investigators hoped to find evidence of illegal dumping of excess cherry syrup into a nearby river. Instead, what they found was a booming marijuana operation, a stash of expensive luxury vehicles, and hundreds of thousands of dollars in cash. As shocking as this story is, the detective is out on whether maraschinos really truly, count as cherries.

Remarkable Health Benefits Found in No Other Fruit

These little reds are not as innocent as they may seem, to be sure, but should we shun them? Heck no. Eat them up! Eat them foremost because they are delectable. Eat more because, for all their mess, cherries can boast some juicy health benefits. Recent studies have shown cherries help curb arthritis and joint pain, and because of their natural melatonin, cherries promote good sleep. Sweet dreams, perhaps? Further studies show cherries support good brain functioning, alleviate diabetic complications, lower blood pressure–even help kick some types of cancers! Wow. If only the cherry season lasted longer.

Pro-Tek Gets Rid of the Evidence

Cherries may be a boon once you get them in your mouth, there’s still the bloody mess they make if you’re canning or making any one of hundreds of seasonal cherry recipes, as many of us are. Not to worry. Eat all the cherries you like with full peace of mind. Eco-friendly Pro-Tek gets rid of stains on your table cloth, your chair (Heidi!)–anywhere, really–with a fresh cherry scent and no scandal whatsoever. That’s putting a cherry on top.